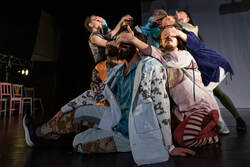 Tomorrow’s Witnesses/Morgondagens Vittnen/Huomisen Todistajat was a dance-theatre project that speaks about the impact of war on the individual and what it means to be forced to leave your home, your family or your country because of war. Tomorrow’s Witnesses  bridges stories from World War II to the present, from the forced evacuation of Finnmark and the scorched earth campaign that followed, Finnish children being moved to Sweden to the stories of refugees who have recently fled from war and conflict in other parts of the world. The project took place in Hammerfest (Norway), Luleå (Sweden) and Rovaniemi (Finland).
The project brought together elderly that survived the Second World War and young refugees that have come to the north of Scandinavia from wars and conflicts in other parts of the world. In Luleå and Rovaniemi the focus came to lie on ‘war  children’ who came to Sweden during WWII and refugees who came to Sweden or Finland recently.

The piece was lead and choreographed by Benno Voorham. We worked with three different areas and working groups creating three extensive project for beginning of 2018 Hammefest, 2019 summer Luleå to 2019 end of the year in Rovaniami. In the project we worked a lot with group improvisation structures that worked, I think, as kind of bodily methods of group formation, solidarity and communication. It was beautiful.
​
Here´s a link to the documentary of the Hammerfect part of the project:
​
https://lavadans.com/projects-2/#