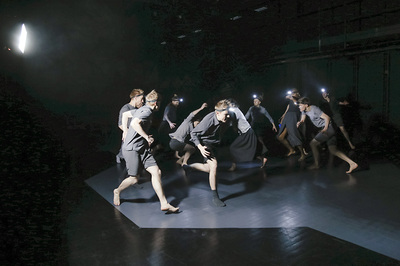 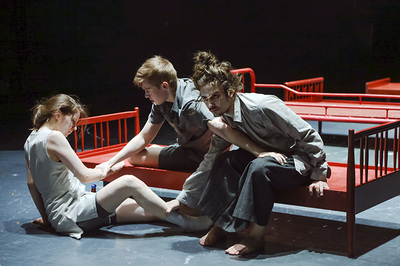 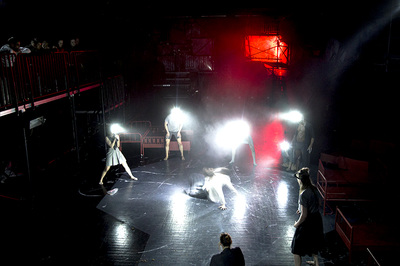 pictures: Sanna Käsmä
Macbeth Laboratorio (2014) was  collaboration between the director/actor/gestalt-therapist Liisa Mustonen, choreographer Samuli Nordberg and the BA in Dance student of Theather Academy. The performance skills applied in this project included intention-emotion based actors skills, strong physicality and therapeutic dealing of group dynamics. The range of skills and learning concerning performing and perfromance making was vast. I learned a lot, got good experiences and deepened my interest for the connection between body and mind, the importance of intention as a creative force in action and the connection between power and learning. You can get the best out people not by oppresion and hierarchy but by dignity and listening. Stiff hierarchies and lack of communication of feelings are a stagnating force surpressing human potential!
Directed and choreographed by Liisa Mustonen and Samuli Nordberg
Performers:  Miika Alatupa, Krista Arppo, Ima Iduozee, Karoliina Kauhanen, Anni Koskinen, Anna Kupari, Sebastian López-Lehto, Joonas Luomala,  Iiro Näkki, Justus Pienmunne, Pinja Poropudas, Johannes Purovaara,  Katriina Tavi

Converations with An Ant Colony 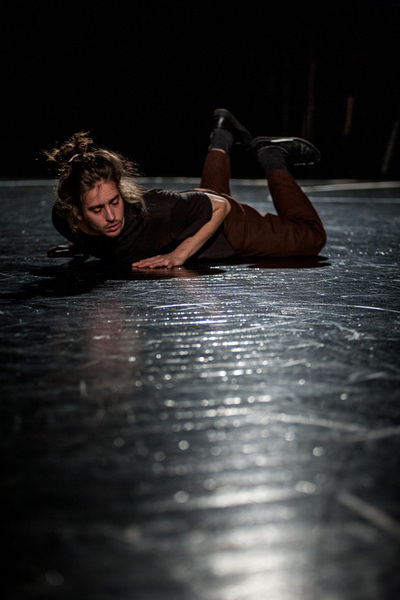 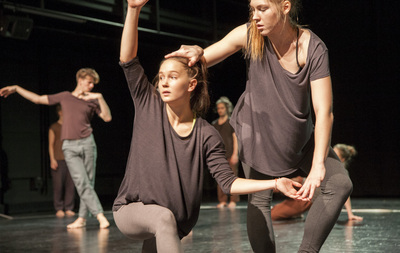 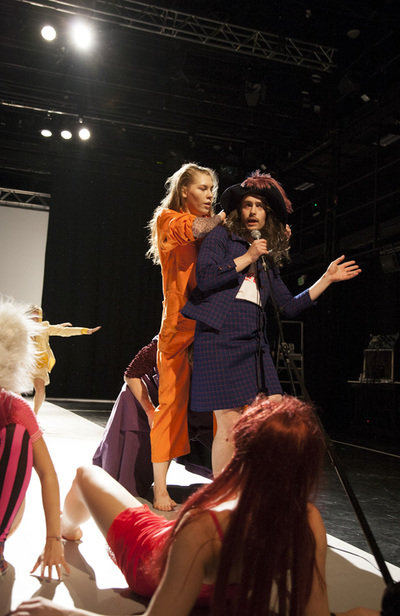 Conversation with An Ant Colony (2013) was an improvisation based piece choreographed by Liisa Risu. The work was according to Risu her most open one, so we really got to start a new each performance. Liisa Risu has a vast and well articulated know-how on improvisation and choreography so working with her was a great exprerience. It was a challenge to trust my self, the group and our process as force making the piece every night. We learned different tools to practise improvisation concerning awareness of space, relation to others and the body, many of them created by Thomas Heuert.These body and space exercises created the basic language structure or horizon of possibilities and achor points which we then worked and improvised with.
Choreography: Liisa Risu & co.
Dancers: Krista Arppo, Fuji Hoffmann, Anna Kupari, Sebastian López-Lehto, Outi Markkula, Hanna Mönkäre, Iiro Näkki ja Katriina Tavi
Sound: Iiro Ollila
Light:  Mia Kivinen

Dog´s Thought And Other Things 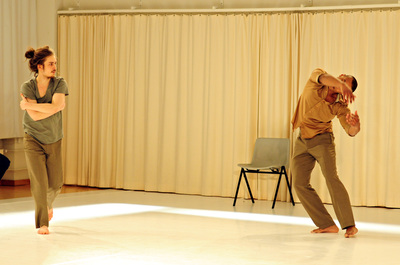 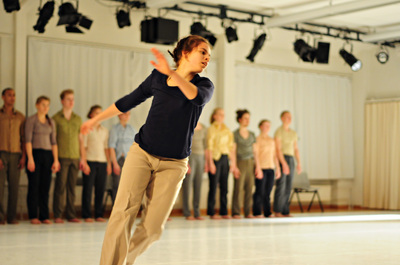 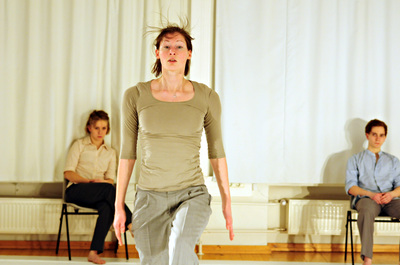 Dog´s Thoughts And Other Things (2013) was a release technique based movement composition were movement was considered as a subject in itself. It was choreographed by the beautiful and sensitive Sanna Myllylahti. Movement material was composed with a deconstruction - reconstructio method were an original phrase took different form when alternating it. Composition in general was then a clustered varition of these varitions and counter-themes. Participating in this prosess was fruitful in a sense that in enable the close-zooming of movement functionality and the structure of composition. How to make  movement as abstraction meaningful and completely functional for you body and sense? What makes an abstract set of movements and scenes a coherent and subjectively meaningful whole?
Choreography: Sanna Myllylahti
Light design: Janne Björklöf
Sound design: Fornier Ortiz
Performers: Miika Alatupa, Krista Arppo, Ima Iduozee, Karoliina Kauhanen, Elisa Keisanen, Anni Koskinen, Anna Kupari, Sebastian López-Lehto, Joonas Luomala, Outi Markkula, Anne Naukkarinen, Iiro Näkki, Justus Pienmunne, Pinja Poropudas, Johannes Purovaara, Sami Similä, Katriina Tavi

Sepi from Sebastian López on Vimeo.